Because August is generally such a blazing hot month, this month’s Jewelry Artisans Community  challenge is to make something that represents cool clear water in the hopes that looking at your beautiful creations will make all of us feel cooler.

Well again only 3 of us joined this challenge.

The first thing I thought of when reading the theme for this months challenge was a song by Frankie Lane from the album hell bent for leather.
My father used to listen to when I was a child. I still have the album btw. 🙂

Dawn, from Jewelry Art By Dawn was first to show us her gorgeous earrings.

I picked up some very cool blue beads while over on the coast a couple of weeks ago and knew as soon as I saw them that they were perfect for this month’s challenge. The circular pattern of the dark blue in these beads reminds me of…….

And then came cat from Cat’s wire who recently discovered that she can use the wire wrapping technique for some pendants too instead of using wire crochet on them.
And boy is she good at it.  🙂

This pendant is woven in dark and light blue wire around an ammonite that is about 100 million years old. It never ceases to amaze me that I am able to work with such old and beautiful fossils. The cool clear water is represented by the wires, but also the ammonite itself ………

As usual I was late with thinking about what creation to make let alone starting it.

I’m panicking here too, haven’t even thought of what to make.
Maybe I can use a few of the scales I bought last week.

Well I did use the scales that I bought and as usual I don’t know which photo to show you guys.  🙂
I made a necklace and earring set using chain maille and scales.
Mini scales and a few normal sized ones in blue and in silver, the mini scales have a nice flow when you wear them and the earring make a soft jingly sound. 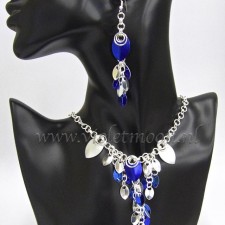 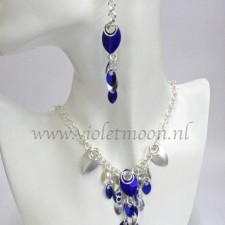 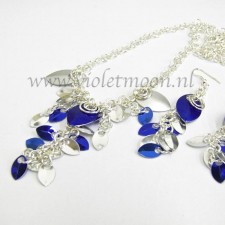 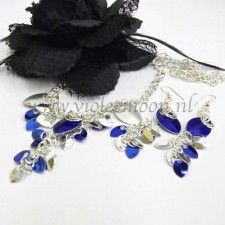 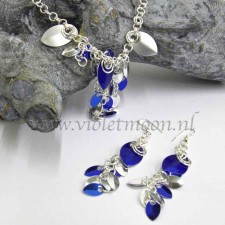 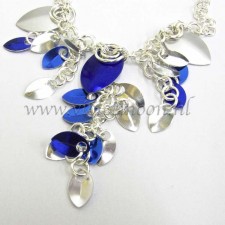 Feel free to visit the websites from the others, visit and join the Jewelry Artisans Community to read more about the fun we have with these challenges,  share this article or leave a comment about cool clear water.